To get a sense of the incredible changes and dynamic movement taking place in the what is to become the next “gold” rush of our lifetime just turn back the clock a few years and look at the staggering number of new business start-ups that have occured in the Cannabis industry.

The cannabis Industry as a whole is composed of everything from Industrial hemp production, through medical and recreational use of cannabis which has spurred an incredible surge in new products and processes being developed to serve a fast growing industry. Every year additional states have passed various forms of legislation regarding the use of cannabis which have all contributed to the industry as whole getting big enough to achieve it’s own critical mass. This “critical mass” has drawn the attention of new entrepreneurs as well as larger more established business who are looking at the amount of money and opportunity that this new industry is producing.

All current estimates show that that the growth potential in this exploding new industry is off the scale. Most estimates hover around the 60% to 70% annual growth projection, but most everyone admits that things are changing so fast that an accurate estimate is difficult at best. Many believe that in 3-5 years the annual revenue from this industry could be over $10 Billion dollars…that’s right….billion with a B. Looking further out we are talking about a thriving nationwide industry doing a $100 Billion dollars in 10 plus years. If you are a business person / entrepreneur and that doesn’t get your attention…nothing will.

Many are referring to this new opportunity as the “green” rush of the 21st century. As with all past “gold rushes” there are first movers who see the writing on the wall and jump right in and establish a foothold in the beginning and many others who see the excitement and hype and are willing to take a chance and establish a new business model hoping to capitalize on the new opportunity.

As with all industries there are private companies both large and small and publicly traded companies which trade on a stock exchange under a ticker or stock symbol. At first most if not all businesses or companies starting up or moving into this new arena were small new private companies. As things have progressed we are seeing the natural evolution of smaller private businesses either trying to become a publicly traded company which is both costly and time consuming.

But….many would say just go the bank and get a loan or find private funding to make things happen. Sounds good right? Not so easy…Banks are not loaning much money to Cannabis related businesses and private investors often want their money out at the most inopportune times. Both of these circumstances are the main reasons many are now even considering this “going public”option in order to continually fund and control the growth of their business in this extremely fast paced industry. To survive they need the liquidity offered by being a publicly traded company. This ability to have access to funding capital and liquidity of the public markets is going to be critical to not only their growth but most importantly to be able to survive long enough to become a solid viable success in the “dog eat dog” real world of business.

Take the state of Colorado for example, many head start or “first mover” businesses there have grown to the point where they have considered becoming a publicly traded company themselves or have merged with or been acquired by a publicly traded company to bolster their financial position and awareness to the general public. With the newly found success in Colorado or wherever they may have started they are now eying opportunities in other states.

These opportunities take the form of moving into an area and directly competing with existing businesses or trying to grow by establishing strategic partnerships with these same businesses. These strategic partnerships are an amazing opportunity for smaller private “mom & pop” businesses to grow and survive and most importantly profit from their hard work and not get pushed out of the way as is the case with most small businesses who get overrun by larger more established companies with deeper pockets and more established well funded marketing plans.

Moving from being a startup to an established and operational small business is one thing, but moving into the unfamiliar and ” big and scary” world of Wall Street is definitely scary and intimidating to the uninitiated. That “scary” unknown is enough to make many small business owners shy away and not even consider the huge opportunity which is staring them in the face. Besides the basic fact that many in the small private business world see Wall Street as the “Big and powerful OZ”, or “the Man” an unapproachable and dominant force which has been viewed by many as the “immoveable object” that has suppressed small business growth in favor of huge corporate profits.

In reality though…now is the time for these new emerging small businesses to use the “force” of Wall Street to launch them and their business to the stratosphere. But, they don’t have go it alone anymore. There have been very few options for these smaller businesses even considering this “public” option. Where even to begin and who will guide them safely through this new and unfamiliar process? Fortunately there are “specialty” consulting firms who specialize in forming strategic partnerships between public and private companies whose synergies and business models compliment each other.

These firms will guide the parties involved through the entire process from first introductions to the final signing of the new entity created. They take the “scary” out of the whole process while providing the “mom and pop” or smaller company a way to grow while not giving up the “blood sweat and tears” and control of their “baby” which they have slaved over night and day for a long time. Structured correctly this new partnership provides the original owners / management of the company being merged or acquired majority control over their everyday business operation.

Adhering to the “KISS” (keep it simple) principle, that is really the preferred method of establishing these partnerships because you keep in place the system that made the whole company a success in the first place. Using the “if it isn’t broke don’t fix it” principle is the way to go for the most seamless transitions from private to public. 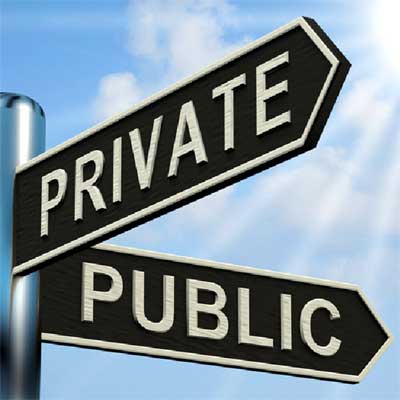 In the end this method of forming these partnerships between public and private companies provides a catalyst for growth and solidity that neither could acquire alone. Once completed and in the public market arena the value of the sum of their combined revenues becomes 5-10 times larger because of the liquidity provided to the shareholders who will buy and sell the company stock on whatever exchange it is traded on.

This coming together of public and private is the way of the future for many involved in this “green” rush who are wanting to become solid and profitable performers for the long run and not get run over or run out when the “big” money shows up to the party….which is going to happen. Count on it.